Hind Al Soulia - Riyadh - From setting up coronavirus wards to translating public health information, Arab-Israeli doctors are playing a vital role in tackling the pandemic while facing some unique challenges.

“I found myself not only a doctor, but also a builder, and a translator – it’s a very big responsibility,” said Ameer Elemy, assistant director of Nazareth Hospital EMMS in northern Israel.

Dr Elemy, 33, was just five months into the job when he was put in charge of the hospital’s coronavirus preparations, creating “victory departments” with dozens of beds ready to accept patients.

Finding the initial lack of coronavirus advice in Arabic “a bit problematic”, he also took on the task of translating information for the public from Hebrew. Doctors say official updates are now readily available for Israel’s Arab community, which makes up about 20 per cent of the population.

So far the virus has killed at least 230 people in Israel. Dr Elemy gets to the hospital before dawn, determined not to see the numbers spike as they have done in some countries.

“We watch Italy, we watch France, we watch the United States and we don’t want to be there,” he said.

On the coast in Haifa, a mixed Arab and Jewish city, Khetam Hussein stays connected “24 hours a day” as she runs the coronavirus response at Rambam Health Care Campus.

“It’s not a time to relax,” said Dr Hussein, who as director of infection control has overseen a new camera system to monitor Covid-19 patients with mild symptoms remotely.

“To get used to the concept of treating patients from afar, from behind a camera, is very difficult for us,” she said.

Patients with moderate to severe symptoms are being treated directly, with doctors protected by masks, eye shields, gloves and overalls in some cases, Dr Hussein said.

But the protective equipment used in hospitals across the country can be cumbersome during long shifts, according to Yasmin Jaber, a resident physician at Hadassah Hospital Ein Kerem in west Jerusalem.

“The last shift I was in there for six-and-a-half hours,” said Dr Jaber. “You just want to rip it off, it’s very uncomfortable.”

Despite all the precautions there remains a risk of people with the coronavirus entering regular hospital departments undetected, and Dr Jaber is currently in home quarantine after being exposed to a patient who turned out to be infected. 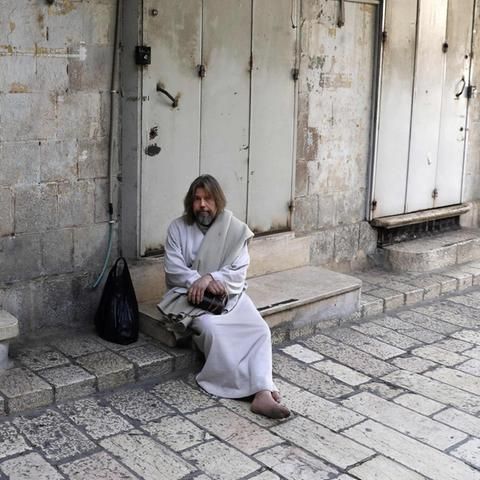 While Hadassah initially sent its tests to a hub at Sheba Medical Centre, near Tel Aviv, the hospital is one of many to now process its own samples.

Testing for the virus is also offered at street booths and drive-through stations supported by the health ministry. But there have been complaints that availability was limited, particularly in occupied East Jerusalem.

“Testing I think was late, we received only 100 swabs and that was very minimal,” said Jamil Koussa, general director of St Joseph Hospital in East Jerusalem, which is expecting more testing kits.

Over at Makassed Hospital, another East Jerusalem facility primed to accept coronavirus patients, tests were originally processed in Ramallah in the occupied West Bank.

They are now sent across Jerusalem to Hadassah Hospital, but the lack of on-site processing remains “a very big problem”, according to Makassed’s director general Haitham Hassan.

He also criticised Israeli authorities for only recently establishing community testing facilities in East Jerusalem, having shut down such a clinic last month in the Silwan neighbourhood because it was run in collaboration with the Palestinian Authority.

The coronavirus pandemic has also affected the flow of medical staff and patients between the West Bank and East Jerusalem, as checkpoints have been closed for weeks.

“Eighty per cent of my doctors" as well as the majority of general staff are from the West Bank, said Dr Hassan. After initially facing problems reaching the hospital, most employees can now come to work.

But Israel's restrictions on movement mean Makassed is receiving less than a third of its usual patients from the West Bank, Dr Hassan said, contributing to a “financial catastrophe” as the hospital struggles to absorb operating costs.

Patients are also staying away from hospitals for fear of catching the coronavirus.

Dr Hussein said 60 per cent of the beds at her hospital in Haifa were empty, with people not seeking medical care until they are seriously ill.

“They don’t stop being sick, they just stopped coming to hospital,” she said.

Israeli hospitals currently have 310 inpatients with the coronavirus, according to official figures updated on May 3. Another 3,512 patients are staying at home and 1,591 are in hotels requisitioned by the government. More than 9,634 have recovered.

The health ministry's figures show total of 16,193 cases were detected till May 3, but do not account the discrepancy of about 900 cases not listed in any of the categories above.

The relatively low numbers have led Israel to start relaxing its coronavirus measures, although there are concerns that such moves, coupled with the holy Muslim month of Ramadan, could spark a second wave of cases.

“Ramadan is a very social month, we are a bit afraid of what is going to happen,” Dr Elemy said from Nazareth.

He said he had noticed a rise in the number of Arab-Israelis with coronavirus, although this could be because of increased testing rather than people socialising in greater numbers.

Mosques are currently shut and stores in Muslim-majority areas ordered to close between 6pm and 3am. Visiting family and friends has also been ruled out, both within Israel and due to the closure of checkpoints with the West Bank and Gaza.

“We’re a typical Palestinian family,” said Dr Jaber. “We have family in Jerusalem, in the West Bank in Hebron. Every year we have gatherings that this year obviously we aren’t doing.

“It’s a lot more quiet and sad this year,” she added.

Over the coming weeks doctors hope to resume work in departments such as elective surgery, although they are not necessarily expecting a complete return to normal.

“I think corona is here to stay,” said Dr Hussein. “Now we are going into the ‘corona routine’, we have to learn how to live with this.”

These were the details of the news Israel's Arab doctors surmount challenges in combating coronavirus for this day. We hope that we have succeeded by giving you the full details and information. To follow all our news, you can subscribe to the alerts system or to one of our different systems to provide you with all that is new.