Thank you for your reading and interest in the news 'We are still in pain': one family's struggle after surviving Dubai-India plane crash and now with details

Hind Al Soulia - Riyadh - About a week after the Air India Express plane from Dubai to Kerala crashed on landing, the nightmares have finally ended for young survivor Insha Ali.

The 11-year-old could not sleep for days. She repeatedly saw images of her family fleeing from the wreckage and felt searing pain shoot through her fractured leg.

“When I tried to sleep, I would see pictures of when the aeroplane landed and broke,” said Insha, who had been discharged from hospital and is now recouping at home in India's southern Vadakkangara city.

“I would see us trying to run but when I stepped on the floor, my leg would [hurt], my eyes would open and I would get up.

“My leg was actually stuck between chairs in the plane and I remember crying because I couldn’t move. I'm better now. The pictures in my mind have stopped.”

Eighteen people including two pilots died and 172 were injured when Flight IX 1344 skidded off the runway on August 7, crashing into a gorge at Kozhikode airport. The flight was repatriating Indians stranded by the coronavirus crisis and was carrying 190 passengers.

Several passengers were discharged this week with some spending time in intensive care units in three city hospitals.

“Survivors are still in shock. Many cannot sleep. They were sitting in the same plane where people died. This causes mental and psychological trauma for those left behind. They will need continuous counselling.”

The Ali family was returning to Kerala and travelling without their father Sulfikar, a Sharjah resident.

Insha was seated at the back of the aircraft with her mother Shamila, elder sister Ishal, and younger brother Mohamed Zishan.

When the plane plunged 11 metres into the valley, the family was trapped under luggage, wires and overhead electrical panels that needed to be pulled away during the rescue.

Sixteen-year-old Ishal tore off part of the personal protective gear the family was wearing to wrap it around her brother’s head.

The sight of a gaping wound on the back of her nine-year-old son’s head was too much for Shamila Ali who blacked out.

“When I saw that the bleeding wouldn’t stop, I lost consciousness,” said Ms Ali.

“After I regained consciousness, I kept thinking the plane would catch fire and we would be trapped inside.”

Zishan needed stitches and is recovering from burns that cover his back.

His mother worries about the impact the terrifying experience has left on the child.

"My son is still in shock," said Ms Ali whose sight is impaired and face swollen due to injuries. "We talk to him and he only says a few words. Before he was very talkative."

Like her children, she constantly remembers the violent jolts and terrifying noise when the plane crashed.

The family is grateful to have escaped with bruised spines and swelling caused by multiple injuries.

"There was a woman and her son sitting right behind us who lost their lives," said the 35-year-old mother.

"My family is still in pain and I can’t see colours very well. But we have our lives thanks to god." 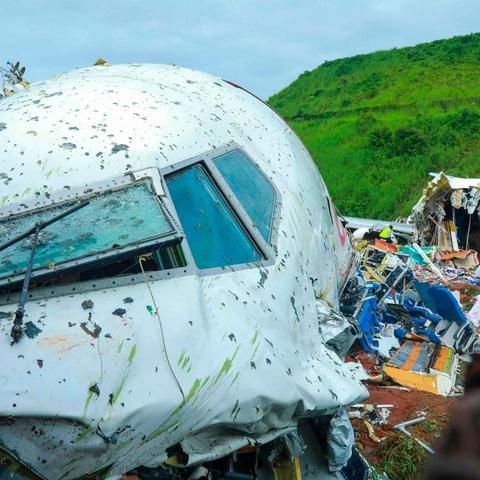 The Ali family and many other patients have been through therapy sessions in hospital and plan to sign up for further counselling.

For the eldest child Ishal, the accident has been life changing.

From supporting her mother and siblings on the plane that cracked open and travelling with her brother to hospital, the teenager feels she can handle any challenge.

"It felt like a rollercoaster before the plane finally stopped and it was scary to see my family and all the injured people," she said.

"I was scared too. But now I feel more confident. I feel now that I have gone through all this, what more can happen. Before I didn’t trust myself. Now I feel I can do anything.

The family has had to work on young Insha’s dream of becoming a pilot. The young girl is a fan of the 2016 movie Sully in which Tom Hanks recreates the true story of pilot Chesley Sullenberger who landed a damaged plane on the Hudson river saving 155 passengers.

“I always wanted to be a pilot but after the crash happened I changed my mind. I didn’t want that career anymore,” said Insha.

“But my father has been talking to me. He said there could be many accidents in life and we can overcome it. He convinced me so now I have decided to stick to being a pilot.”

These were the details of the news 'We are still in pain': one family's struggle after surviving Dubai-India plane crash for this day. We hope that we have succeeded by giving you the full details and information. To follow all our news, you can subscribe to the alerts system or to one of our different systems to provide you with all that is new.