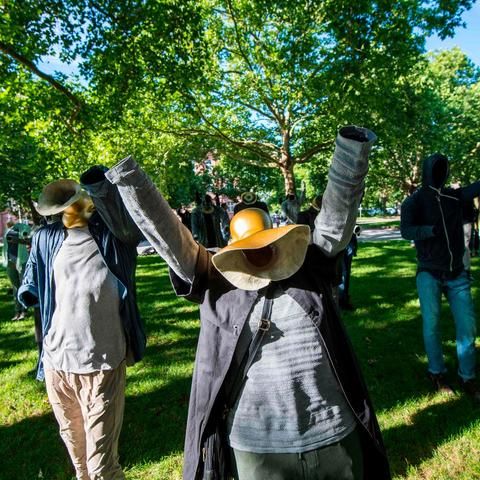 Two Syrians have been arrested in Germany on suspicion of executing a soldier and for supporting Jabhat Al Nusra when the group was affiliated with Al Qaeda during the civil war in Syria.

Khedr AK is suspected of having joined Jabhat Al Nusra before July 2012, while Sami AS allegedly supported the group, which was designated as a terrorist organisation by the UAE in 2014.

Khedr AK is alleged to have been involved in the killing of a captured lieutenant colonel in the Syrian Army on June 10, 2012, along with other members of the terrorist group.

He allegedly guarded the handcuffed prisoner, who had been severely tortured, on the way to the execution site where he was shot.

Sami AS is accused of filming the execution, can be heard praising the soldier being killed and then released the footage for propaganda purposes.

The two were detained Naumburg and Essen on Monday morning and had their homes searched. They are expected to face a federal judge later in the day.

Nearly 800,000 Syrian refugees arrived in Germany in 2015 as the country opened its doors during the European migrant crisis in a move that has since become among the most contentious in German politics.

The large number of Syrians fleeing the civil war that broke out 2011 has led to the arrest and trial in Germany of those believed to have committed crimes during the conflict.

This includes not only members of terrorist groups such as ISIS and Al Qaeda affiliates but also Syrian regime officials.

A landmark trial of two former Syrian intelligence officials in the city of Koblenz on crimes against humanity has sparked hope that allies of Syrian President Bashar Al Assad will see justice for the vast array of crimes they are believed to have committed.

Alleged former ISIS members have also been detained. The German-Tunisian Omaima Abdi, who lived in Hamburg, is on trial for crimes against humanity and enslaving a 13-year-old Yazidi girl.

An Iraqi man, Taha Al-J, whose family name is unknown, is accused of murdering a five-year-old Yazidi slave and is in court in Frankfurt.

These were the details of the news Germany arrests two Syrians over Al Nusra execution video for this day. We hope that we have succeeded by giving you the full details and information. To follow all our news, you can subscribe to the alerts system or to one of our different systems to provide you with all that is new.