Aden - Yasmine El Tohamy - They're both the latest additions to Pepsi-backed global super group Now United, which comprises 16 performers from different countries around the world, though their journey to international stardom couldn't have been more different. In pre-Covid February 17-year-old Australian Savannah Clarke's audition process was one you may expect in the modern music era. Discovered on Instagram, the Sydney teenager was invited to Los Angeles to try-out behind closed doors for the band's head honchos including media impresario and Spice Girls founder Simon Fuller. Clarke's talent dictated she was almost instantly offered a place just before the planet began shutting down to halt the spread of the virus. On the other hand, as a result of the pandemic, 18-year-old Beirut native Nour Ardakani completed rigorous video conference call-backs fans could near enough follow in real-time to narrow down 1000 applicants. The Middle East's first representative was hired on Monday, her unveiling broadcast on the Now United YouTube channel.

"It has been super quick, I haven't had a chance to process everything," Ardakani told us when we met with her and Clarke at the Paramount Hotel in Dubai on Wednesday. Ardakani had just flown in to meet up with fellow band mates who have been here for a few weeks recording and creating content for their millions of social media followers. "Everyone is still trying to understand that's going on, but my family is super supportive and super happy." 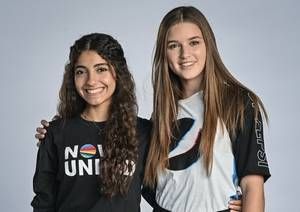 "It feels incredible. Having Nour be with us for the first time, she's so beautiful," Clarke added. "Having someone here who is also new with me and having the same feelings is so cool."

Representing one's nation, whether in sport or in the political sphere for example, is an opportunity seldom afforded though a privilege even more rarely considered in the music industry outside the Eurovision Song Contest. Not many think of Rihanna as Bajan, or Adele as British per se. Their music and actions do not necessarily symbolise the country of their birth. NU's appeal, however, largely stems from each artist embodying from where they hail. For instance Clarke's Aussie pride matches Heyoon Jeong's Korean and Sabina Hidalgo's Mexican identities. 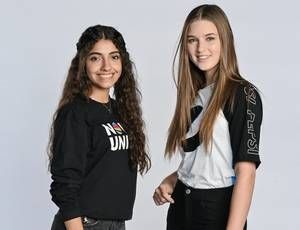 "It is a really big responsibility," Ardakani told us of the honour. "I'm not only representing the MENA region, but also the youth.

"I can't wait to meet everyone (the rest of NU). I want to get to know their cultures."

Ardakani added she hoped to instill a little Arabic touch into the group's music because "that is what Now United is all about."

Regarding upcoming plans, it appears the pair is itching to get moving and had some inspirational parting words.

"I'm looking forward to traveling the world again," Clarke said. "Coming to Dubai and being together for the first time in ages has been amazing. I have been going on all these adventures like skydiving, which I'd never thought I'd do, I went to the desert and we have been making so many music videos.

"The most important thing is to follow what you love and don't let people tell you you're not good enough. If you keep pushing you'll make it."

"Hard work does pay off," Ardakani said. "If you work towards your goals you'll get there some day and be super happy because it's your passion."

How did your family react when you made it into Now United?

Clarke: My sister was like 'I'm going to be famous too!' My family is so supportive. I'm so grateful for them allowing me to do this.

These were the details of the news Bollywood News - Now United's Nour and Savannah living the pop dream in Dubai for this day. We hope that we have succeeded by giving you the full details and information. To follow all our news, you can subscribe to the alerts system or to one of our different systems to provide you with all that is new.